From the creator of InuYasha and Ranma 1/2 comes Kyoukai no Rinne, an anime/manga about a girl named Sakura who is able to see spirits and ghosts and a boy named Rinne, of human and shinigami heritage, who aids lingering spirits pass on from this world to be reincarnated. Airing from April 2015, there’s only 9 episodes out but this series is definitely one to watch and wait for.

If the name Rumiko Takahashi wasn’t enough to convince you then here are some other reasons why you should watch it:

If, like me, you are reminiscent of InuYasha, you’ll easily find similarities between the characters. InuYasha and Rinne are half human boys who can travel across worlds and wield gigantic weapons in battle while Kagome and Sakura are kind high school students with the ability to see what others cannot( sacred jewel shards and ghosts). If you read the manga you may even see how the male and female protagonist of each series have similar facial features.

The Rinne equivalent of Shippo/Kirara happens to be a cat named Rokumon ( who is adorable and quite unlike Shippo in terms of arrogance). There’s also a love triangle.

Yet despite these similarities, Rinne stands out on its own. While the characters may be rehashed, they’re not carbon copies either. Rinne’s patience and level-headed nature make him an interesting character. His relationship with Rokumon is lovely to watch. It’s also nice to see how Rinne and Sakura start off platonic and their love story isn’t too palpable. 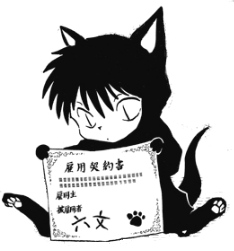 The series revolves around Japanese culture pertaining to ghosts and the afterlife. Up until watching Kyoukai no Rinne, I used to always picture shinigami looking like Ryuk from Death Note. The concept of samsara or circle of reincarnation, wherein we are all continuously being reincarnated in a cycle of existence, is interesting. Not to mention, the contract between black cats and shinigami!

Don’t expect the depth of InuYasha but rather relish the episodic adventures of Rokudou, Sakura and Rokumon involving ghosts and spirits. Kyoukai no Rinne is a humourous and light series, making it refreshing to watch while taking a break from, well, life. One of the funny things about the anime is Rinne’s money woes. The poor guy can’t catch a break and it makes me both laugh and feel for him. Yet despite being constantly ailed by financial worries, he’s not at all a Scrooge. Those moments when he forgets about the money and does what’s right show how endearing and admirable he is. Adding to the comedy is the sheer randomness!

The opening and ending themes are nostalgic of 90’s anime which I love. You’ve got to appreciate when songs just click with animes. Even more so when they click with you.

Missing fresh air and the freedom to go out. Feels like months since we went to Nandi Hills @jannvy @santhoshi.kashyap
💠
❤️
💛
25 on 25th. #birthday #gokarna #weekendtrip