(Before continuing let me make this clear, I am not talking about the movie The Notebook because I’ve never seen the whole thing. I’m talking about notebooks that you write in.)

Ever since I was a child, my favourite store was Staples, where office supplies and school supplies stretched on in endless aisles before me. Even now, I love stationary and can’t help buy more notebooks and supplies than I could possibly use. My insatiable rationalisation when I buy new things sounds something like ‘I will definitely use them!’ or ‘How can I NOT buy this?’, yet in actuality I don’t need any reasons to buy more notebooks.

As a student, they won’t be wasted and sometimes they motivate me to be neat with my notes and diagrams. I couldn’t possibly bear to scribble in the nice ones so I guess I’m a little prejudiced.

Not even, just notebooks but art supplies, colour paper, sketch books, anything and everything. 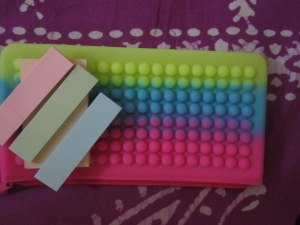 Now that I live in Bangalore, my favourite place to buy stationary is Landmark. They have the best stuff I’ve ever seen, sort of like my paradise.

Gotta have em’ all, I guess.

Since I’m one of the laziest people on the planet (seriously there are days when I don’t wear pants) I always sing along to The Lazy Song by Bruno Mars. That song just describes the perfect day. And most of my Sundays, not to mention.

I know reporters can seem pesky but they’re not all like that and it’d be an honour to be interviewed by a Pulitzer-winning journalist.

That being said my three I-never-want-to-be-asked questions are:

1. How religious are you?

Not only do I make it a point to never discuss religion and politics with others, I’m also religiously confused. I’ve alternated from the religion I was raised in to being an atheist to being an agnostic so while some may call me godless, all I can say is I don’t know. And that’s an answer many don’t seem to like.

2. Tell us about your latest relationship.

If I were in a relationship at the time, I would like to keep details about it to myself. I wonder how some celebrities deal with being hounded by this question as opposed to asking them questions about their careers.

3. What is your take on alcohol and drugs?

I’m a social drinker and I enjoy my drinks so that’s not a problem for me but I’ve smoked (cigarettes not marijuana) on occasions and found it isn’t for me. However, majority of the people I know have smoked pot and that shouldn’t be a reason to judge them and the decision is theirs at the end of the day. I’d have to say I’m a neutral pacifist between those who are anti-drugs and alcohol and those who abuse them.

I may have answered these questions now but I probably wouldn’t be as comfortable speaking about it than writing about it, especially directly to another person.

2020 has been so turbulent, and I keep coming back to this painting. The calm and the storm. The highs and the lows.
🌊 #throwback #beachscenes
Missing fresh air and the freedom to go out. Feels like months since we went to Nandi Hills @jannvy @santhoshi.kashyap
💠
❤️

Hello kind stranger, thanks for visiting :)